Low-income and high-income Americans combined now outnumber people in the middle class, according to a new Pew Research Center report, for the first time in four decades since the center started tracking this data. The study defines middle income as adults earning “somewhere between $42,000 and $126,000 a year for a three-person household,” reports Lydia O’Connor.

Looks like those Bush tax cuts are really working. -DB 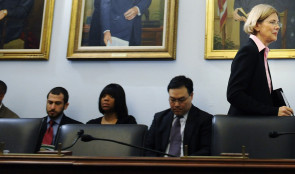