Underground is a thrilling, new television series currently airing on WGN America. The 10-part series, set in Georgia in 1857 just a few years before the start of the Civil War, chronicles the lives of the people who opened up their homes and ran the “stations” on America’s Underground Railroad and the people who made use of that vital human network to escape to freedom in the North. Writers and series co-creators Misha Green and Joe Pokaski—along with Anthony Hemingway who directs the first four episodes—make brilliant use of a large ensemble cast, including Jurnee Smollett-Bell (True Blood), who plays the soft-spoken and often underestimated house slave, Rosalee, and Amirah Vann, who plays her ever-vigilant and ever-capable mother, Ernestine. Aldis Hodge (Straight Outta Compton) plays Noah, the blacksmith who inspires Rosalee and the others to risk their lives for freedom.

I recently had the pleasure to meet Misha Green and talk with her about Underground at a screening of its pilot episode, thanks to a special invitation from Susan Sandler, NYU Tisch School of the Arts Professor and Faculty Advisor to New York University’s student-run Fusion Film Festival, which celebrates women in the film, television and new media industry.

The April 8th screening—which was followed by a Q&A with Misha Green and co-stars, Jurnee Smollett-Bell and Amirah Vann—capped off another successful year for Fusion, which showcases the work of emerging new female talent and has attracted such visionaries as Lena Dunham (HBO’s Girls), Amy-Sherman Palladino (creator of Gilmore Girls) and award-winning film producer and this year’s women of the year, Christine Vachon, as well as accomplished artists within the NYU community.

Sandler has been a passionate supporter of Fusion since its inception thirteen years ago and a fierce advocate for women in the film and television industry for her entire career. On Friday night, she was especially proud to be hosting an evening celebrating the work of her former student and distinguished graduate of NYU’s Tisch School of the Arts. “Misha is a gorgeous role model for women creators everywhere. To see my belief in her so fully realized in Underground is a teacher’s dream. Misha is creating television that is both wildly entertaining and urgently important. It’s a stunning achievement!”

Garnet News: You’ve made some interesting choices telling this story of the Underground Railroad, choosing contemporary music for this historical period, for example. Kanye West’s “Black Skinhead” accompanies the opening scenes of the first episode—percussive breathing punctuates the darkness as we witness Noah running for his life, in the dead of night—and sets the tone for the series. It’s absolutely breathtaking.

You’ve also chosen to frame the story of the Underground Railroad as a fast-paced, escape thriller. It’s not the way history, this history, is usually portrayed. Was this always part of the original concept?

Misha Green: Yes. Joe Pokaski (my co-creator on the show) and I, we talked about this from the very beginning. We wanted to be bold. We wanted to push the bar—visually, in our storytelling and with our music. We said, we’re used to seeing this time period like a picture on the wall. We want to take that picture down. We want to live in it. We want this to be fast-paced. It’s a thriller.

When Anthony Hemingway, our director who did the first four episodes, came on, he got that, which was fantastic. Then John Legend came aboard and he was also ready to push the bar with music. We always saw the music as a way of bridging the gap between past and present.

Garnet News: Yes, John Legend is one of the show’s executive producers, and he also produced the theme song, “Heaven’s Door,” which was written by Angelique Cinelu and Curtis Richardson and performed by Alice Smith. The song references the “Drinking Gourd,” the musical map that helped those fleeing to find their way north to the Ohio River and escape across it to freedom.

Misha Green: Yes. Even though we wanted to use contemporary music, we wanted to include traditional music too. We wanted to find ways to blend both kinds of music to create a truly underground sound so that when you come to watch our show, you are getting something different, in all categories. You’re surprised in every way.

Garnet News: We all know about the Underground Railroad historically, or maybe in concept…

Misha Green: Ah. Do we though?

Garnet News: Well, yes. That’s exactly what I wanted to ask you because I don’t think we do know.

Misha Green: I don’t think so either.

Garnet News: So, what do you hope we might learn about the Underground Railroad that we don’t know or maybe have chosen not to know?

When Joe and I were researching the show, we couldn’t believe what we were finding. We kept saying to each other, “This is amazing!” “We couldn’t make this stuff up.” Even I, I knew about the Underground Railroad but I was excited to find so much more… to see that those who were enslaved were also American heroes… to find out that there were enslaved people who were fighting back. Our slogan has become: “This is not about the occupation, it’s about the revolution.” Ours is a narrative, a story that we definitely have not heard nor seen before about this time, this period.

Misha Green: I think that there are all kinds of parallels. People are always asking me if we are meaning to… to connect to today. To paraphrase Nina Simone, as an artist you can’t help but be a sign of the times. When we were first doing the research for the show, Joe and I couldn’t help but see the parallels. We’ve not come as far as we think we’ve come from 1857. One of the ideas that came up and surprised me a little bit, is this question of “How active is your activism?” When you realize what people were doing to get those enslaved across 600 miles to freedom, it makes you wonder: “Would I have opened my home to the Underground Railroad?” Well, I would have been a slave, but…. That question of “What can we do right now to really make a difference?” is more relevant than ever today… as it was back then.

Garnet News: On Underground, you’re not only a writer but also the show runner, the woman responsible for the show’s overall vision. How’s that been for you?

Misha Green: It’s been great! As a writer, you are literally taking a thousand different choices and deciding this is the choice I’m making right now, and you put that on the page. So I don’t think that becoming a show runner on a project you’ve already distilled down is really any different. You do have to talk more to people. As a writer you get to sit in a room by yourself. As a show runner you can’t be that person, you have to say, okay, now I need to tell you all the color of that dress in my head.

I face the same kinds of challenges that all women face in their daily lives. We live in this patriarchal system, a very homogenous patriarchy… and every woman, of every color, is experiencing the weight of it.

Garnet News: As a woman writer, producer and now executive producer, what challenges do you face?

Misha Green: I face the same kinds of challenges that all women face in their daily lives. We live in this patriarchal system, a very homogenous patriarchy, dominated by white males, and every woman, of every color, is experiencing the weight of it, pushing her down. And we have to fight that constantly. It’s there in Hollywood, just like it’s there in the rest of the world.

Garnet News: Television seems to be doing better than film in terms of diversity and providing women with more opportunities to write, produce and direct, with more roles to play, both behind and in front of the camera. Why do you think that is? Or do you even agree with that statement?

Misha Green: I don’t agree with that statement because the numbers are actually down from last year. So I think it’s tempting to point to one or two successful people and say, “It’s better in TV.” But no, it’s atrocious in film, and it’s really bad in TV. Both are bad. So we have to keep pushing for more and more diverse voices because there are not actually that many at all.

Garnet News: What do you think you’ve brought to this story, as a woman, as a woman of color, that might have otherwise been missed?

Misha Green: Any time, all the time, as a writer, you have to have empathy. You have to put yourself in someone else’s shoes. I hope that’s what I’m bringing as a writer. But I can’t help but bring my own corner of the world, which is why working on this project with Joe Pokaski has been so great. He’s white and male and older. So he comes from that corner of the world, and I come from my corner, and we are meeting somewhere in the middle and making it better.

We talk about the Underground Railroad being the first integrated civil rights movement in America. And it’s so funny. Our show has the spirit of that. We’re having these kinds of conversations every day in our writer’s room… conversations hopefully our show will inspire. So many people have been saying that it’s so nice to see from the point of view of those who are enslaved. We wanted to give agency to every single character, not just have whipping posts and people who do the whipping. That was our goal. And hopefully, we achieved it.

Danielle Bizzarro is the co-founder and Executive Editor of Garnet News. She lives and works in New York City.

The True Spirit Of The Olympics

Runners Abbey D’Agostino of the United States and Nikki Hamblin of New Zealand had never met before they collided four laps from the finish of...
From The Huffington Post | Christina Wilke
Politics

Donald Trump has demoted Paul Manafort and hired Steve Bannon as the CEO of his campaign. KellyAnn Conway, who is known for her monologue-like...
From NPR | Nurith Aizenman
Sex and Gender

Saving His Daughter From A Forced Marriage

Durga was 15 years old when her father told her she would soon be marrying a barely educated man in his 40s, with a reputation in her village... 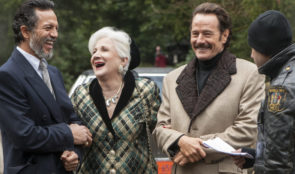 A Woman Can’t Write This Type of Film

From US Magazine | Kathy Campbell
TV/Film/Theater

John Stewart Came Back For A Night

John Stewart came back to late night TV for one night.  He graced the state of the Late Show With Steven Colbert and sat at Steve...
From Cosmopolitan | Maggie Maloney
TV/Film/Theater

No Prince For This Princess