Terence Crutcher’s car broke down on the way home from a music appreciation class at Tulsa Community College.  The first officer on the scene called for back-up. Once the officers arrive a helicopter did too and it was all recorded on videotape.

On the video we see his hands raised, and  he is not armed.  The audio on the video allows one to hear an officer saying:  “That looks like a bad dude too. He might be on something.”

The video shows him walking slowly to his car with his hands up. The cops follow him keeping their distance until he gets to the car. Then one tasers him and another shoots him once, killing him.

And so the story goes, a black man’s car broke down and now he is dead.

Is Texas The Worst Place For Women To Live?

Darren Rainey Was Scalded To Death By Prison Guards 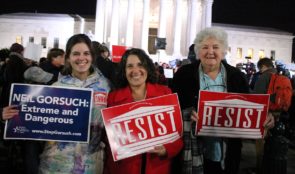 Will Dems Stand United Against Gorsuch?

The House Republicans' plan to replace the Affordable Care Act includes a clever provision to defund Planned Parenthood only by pulling Medicaid reimbursements for...
Load more