I don’t know any professional woman who has ever been at a meeting with men who hasn’t had the experience of being ignored and talked over. I once walked out of a big meeting in Hollywood along with my boss at the time, who happened to be female, because we could not get a word in. It was if we were not in the room. It wasn’t until we got up and walked out that they took notice. The other lead producer realized that the producers representing the Hollywood star had just left the room.

So it comes as no surprise that former Speaker of the House and current House Minority Leader Nancy Pelosi had a similar experience at a White House dinner to discuss DACA. According to The Washington Post,

At one point, Commerce Secretary Wilbur Ross asked, ‘What exactly does the president get out of this deal?’ As Pelosi, the only woman at the table of 11, tried to make her point — that the president gets the cooperation of the Democrats, which he will likely need on a host of issues — the men in the room began talking over her and one another.

‘Do the women get to talk around here?’ Pelosi interjected, according to two people familiar with the exchange.

There was, at last, silence, and she was not interrupted again.

It is inexcusable behavior but it continues unabated and without thought. Every woman must be vigilant to make sure she gets heard. It’s up to us.

Syphilis is back? HIV is still a thing? Isn’t that something IV drug users and “undercover brothers” need to be worried about? As the... 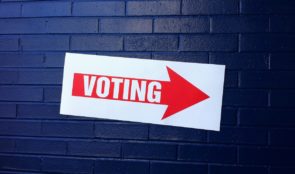 Does the GOP Believe In The Right To Vote?

Russian president Vladimir Putin easily cruised to a fourth term this past weekend, surprising absolutely no one. The only nail-biters were how many people would head...