The Lily Ledbetter Act was signed into law by President Obama in 2009.  To mark it’s anniversary and to further the cause for equal pay, the administration is proposing a new rule that any company with over 100 employees will have to “report pay data by gender, race and ethnicity to further advance equal pay for women in the workplace.”

Often women are paid less and don’t know it. The reporting of data will help to keep companies from discriminating against women. Additionally, President Obama will call on Congress to pass the Paycheck Fairness Act proposed by Sen. Barbara Mikulski (D-Md.) and Rep. Rosa DeLauro (R-Conn.)

Read more at The Hill ‘Dabbling in Feminism’ Is A Crime 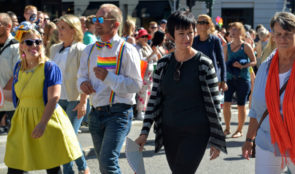 Donald Trump said that he will appoint Supreme Court Justices that are anti-abortion. While he's been all over the map when it comes to... I am the mother of two black girls. I am white. I know that my life of privilege will never allow me to truly...
Load more