On Tuesday, the Republican-led House will vote on a bill that would ban abortion nationwide after 20 weeks. Sponsored by Sen. Trent Franks (R-AZ), the legislation would make it a criminal offense to perform or attempt an abortion after 20 weeks gestation.

Abortion providers under the “Pain-Capable Unborn Child Protection Act,” could be fined or sentenced to five years in prison or both, according to The Hill, if they choose to assist their patients and terminate a pregnancy after 20 weeks’ gestation.

As its name suggests, anti-abortion groups argue that the 20-week bans prevent fetuses from experiencing pain but doctors and experts, including those cited by anti-choice advocates, say scientific research does not support this claim.

President Donald Trump has already said that he would sign the bill if it were to pass.

In a direct challenge to Roe v. Wade,  twenty-one states have already enacted a 20-week abortion ban, according to the Center for Reproductive Rights, however, the bans in Arizona and Idaho have been blocked by court order and are not currently in effect. States began passing their 20-week bans in 2010, when a number of ultra conservative Republicans won majorities in state legislatures across the country.

The U.S. Supreme Court, meanwhile, declined to hear the case pertaining to Arizona’s 20-week ban back in 2014, deferring instead to the Ninth District Court of Appeals, which struck down the state law on the grounds that it violated several of the high-court’s previous rulings, including Roe v. Wade.

The Supreme Court’s 1973 landmark ruling defined the point of fetal viability outside the womb at about 24 weeks of pregnancy.

The latest bill is unlikely to make it through the Senate so why are our representatives in the House so hellbent on passing such restrictive bill?

After suffering a major and very public defeat on their ACA repeal, Director of Federal Reproductive Rights and Health and Senior Counsel, Janel George explains, “Republicans in the House of Representatives are focused on trying to score a hollow political victory by again targeting the constitutionally protected right to abortion.”

The goal of HR 36 is to make it more difficult—in some cases, impossible—for women to access abortion, says George.

George goes on to list the top five reasons the bill is “just plain bad.”

Other reports, including an interview last week in Rewire, suggest that anti-choice groups are using the ban to encourage infighting within the Democratic Party, with the ultimate goal being to get House Democrats on the record before the 2018 election—in the hopes that those voters who oppose abortion rights will reject Democrats who have voted against the bill and vote for their Republican opponents. 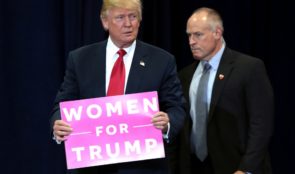 Judge rules that law “does not advance" anyone's interest.