It is likely that Susan Collins’ pledge to vote no on the Graham-Cassidy bill has dealt it a fatal blow. While it ain’t over until it’s over, Senators John McCain, Rand Paul, and Collins have now publicly all said they will not vote in favor of passage.

Collins’ no came after the Congressional Budget Office released its findings on the impact of the Graham-Cassidy bill.

According to the Guardian:

The CBO’s findings, although less specific than usual, still revealed that ‘millions’ of Americans would have reduced health insurance. In particular, Medicaid funding would be significantly shrunk and the Republican bill would shift funds from Democratic states which chose to accept federal funding to insure poor Americans to Republican states which refused to do the same.

Senator Lisa Murkowski of Alaska has yet to say what she will do, though the governor of Alaska has made it clear that he does not want her to vote in favor of it. Senators Ted Cruz and Mike Lee also have said they have problems with the bill.  So unless Mitch McConnell has a trick up his sleeve, it looks as though this attempt to repeal and replace Obamacare will also fail.

It took the Democrats 18 months of hearings and due process to pass Obamacare, and while it isn’t perfect, it has succeeded in insuring millions of people who heretofore didn’t have insurance and stopped the bankrupting of others faced with catastrophic illness.

Our history has shown us that major legislation takes time to pass and then get right. Health care is too important to not consider thoughtfully.  Americans deserve better than these feeble attempts to undo Barack Obama’s legacy just because it’s his. 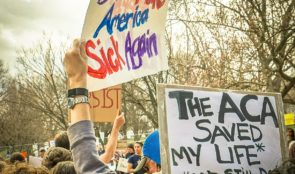